Robert B. Pollock, president and chief executive officer, said: "We are off to a good start this year. Our annualized operating return on equity for the first quarter 2007 was 18.6% and we continue to make excellent progress in our targeted growth areas. Our results this quarter demonstrate our commitment to continued disciplined growth as well as the strength of our diversified specialty insurance business."

Net earned premiums of $1.8 billion in the first quarter of 2007 increased 5% from the same period in 2006, driven primarily by growth in Assurant Specialty Property.

The following chart provides a reconciliation of net operating income to net income for Assurant: 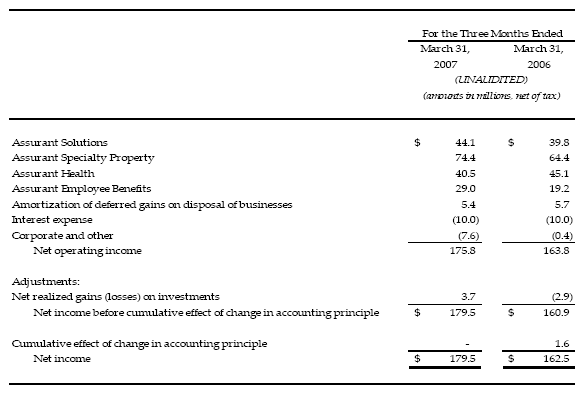 Assurant Solutions first quarter 2007 net operating income was $44.1 million, up 11% from first quarter 2006 net operating income of $39.8 million. The increase for the quarter was primarily attributable to higher investment income due to $7.8 million of additional after-tax real estate investment income compared to first quarter 2006. Results were impacted by higher international combined ratios due to investments made to support the business' strategic expansion. In addition, domestic combined ratios continued to be affected by unfavorable loss experience associated with two domestic service contract clients.

Assurant Solutions first quarter 2007 net earned premiums increased 2% to $583.0 million from $570.4 million in the same period last year. The increase was primarily due to growth in domestic and international service contracts and growth in international credit insurance. Results were offset by an expected decline in preneed premiums due to the 2005 sale of the U.S. independent preneed franchise and the continued runoff of domestic credit insurance.

Assurant Specialty Property first quarter 2007 net operating income was $74.4 million, up 16% from $64.4 million in the first quarter 2006 which included $5.2 million after-tax of reimbursements received for processing claims under the National Flood Insurance Program. The increase for the quarter was primarily driven by the continued growth in creditor-placed homeowners, including the second quarter 2006 acquisition of Safeco's creditor-placed homeowners insurance business, and excellent combined ratios.

Assurant Specialty Property first quarter 2007 net earned premiums increased 45% to $367.0 million compared to $252.7 million in the same year-ago period. The increase is attributable to the continued organic growth and the above mentioned acquisition.

Assurant Health first quarter 2007 net operating income decreased 10% to $40.5 million from $45.1 million in the same year-ago period. While Assurant Health continues to have a favorable combined ratio, the decrease for the quarter is primarily the result of the continuing decline in small group net earned premiums and lower real estate investment income of $2.5 million after-tax compared to the first quarter of 2006.

Assurant Health first quarter 2007 net earned premiums decreased 2% to $512.8 million from $523.4 million in the same year-ago period. Continued growth in individual medical premiums during the quarter of 6% was offset by a 12% decline in small group and short term medical premiums.

Corporate and other net operating loss for the first quarter of 2007 was $7.6 million, compared to a loss of $0.4 million in the first quarter of 2006. The higher loss was primarily due to an increase of tax expense of $5.8 million resulting from changes in certain tax liabilities and reduced real estate investment income of $2.4 million after-tax.

The company, which is traded on the New York Stock Exchange under the symbol AIZ, has over $20 billion in assets and $7 billion in annual revenue. Assurant has more than 12,000 employees worldwide and is headquartered in New York's financial district. www.assurant.com

Some of the statements included in this press release, particularly those anticipating future financial performance, business prospects, growth and operating strategies and similar matters, are forward-looking statements that involve a number of risks and uncertainties. For those statements, we claim the protection of the safe harbor for forward-looking statements contained in the Private Securities Litigation Reform Act of 1995. For a discussion of the factors that could affect our actual results please refer to the risk factors identified from time to time in our SEC reports, including, but not limited to, our 10-K, as filed with the SEC. 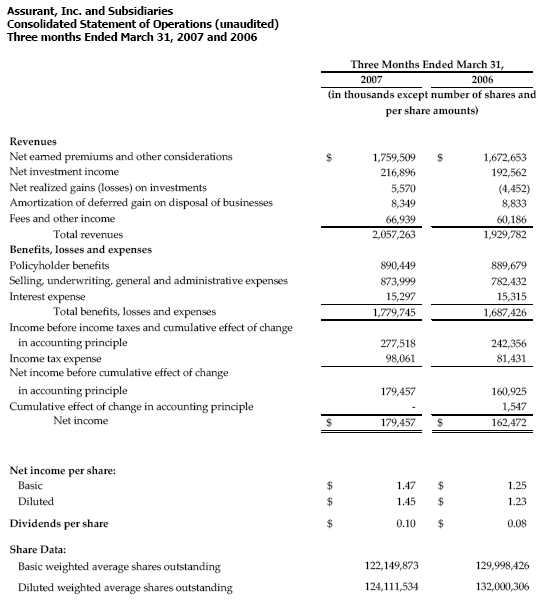 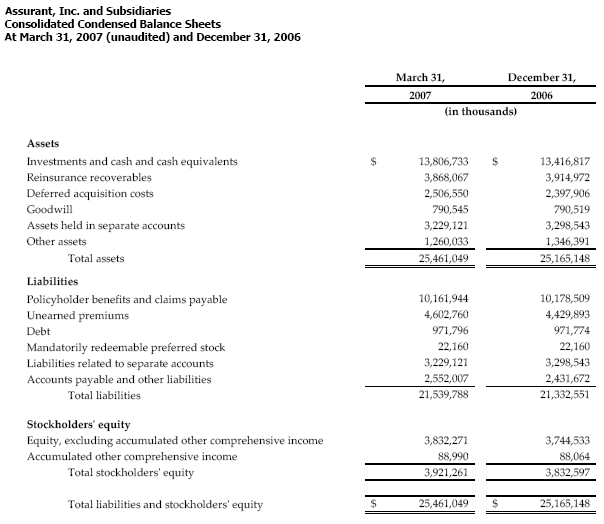 Assurant to Announce 2007 First Quarter Results on May 2, 2007 and Hold Webcast Conference Call on May 3